Is asking about the crypto community advertisement on topic?

Its been bugging me a bit, that community advertisement else site. I'm curious about what it says, but I don't know if asking about it is on topic or not. 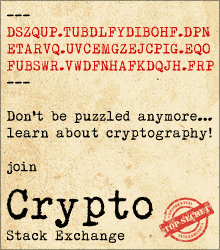 I note that one of the off topic reasons is:

Requests for analyzing or deciphering a block of data are off-topic here, as the results are rarely useful to anyone else.

Which would seem to indicate that "no, asking about how to decrypt this is off topic"

Are there on topic questions that can be asked for that given block of text?

(An asside, if there aren't any, next time the community advertisements come around, could you please not tempt me to ask an off topic question about what it says... or create a historically locked question that does have the answer for those who search for it?)

I would tag this community-ads (link), it says for discussion about community ads, please use the advertisement tag, but that one doesn't exist and I can't create it... so only one applicable tag at this time.)

That “temptation” you're worried about is actually the teaser of the ad… and it obviously works. ;)

If you look at the advertisement again, you'll notice that the advertisement goes hand-in-hand with the rule you're referring to. For a good reason, the byline clearly states “Don't be puzzled anymore… learn about cryptography” instead of “Come over and we'll decrypt whatever you throw at us” .

Like mikeazo already commented, it depends on what exactly you're asking. Generally, cryptanalysis questions are on-topic at this site and just like the two example questions mikeazo mentioned (1,2), such questions can include ciphertext and still be on-topic. Just don't post ciphertext-only questions asking to decrypt a block of scrambled characters.

Taking your example: “…asking about how to decrypt…” would indicate you're probably on-topic, while you're most probably losing yourself in the off-topic area when you're just “…asking to decrypt…”.

See, what that rule you're referencing to actually tries to make clear is that questions that look like

are off-topic because “the results will be rarely useful to anyone else”.

Yet, you are obviously interested to learn about how to analyze and decrypt the ciphertext shown in a Crypto.SE advertisement. In this particular case, the answer could be useful to multiple Crypto.SE members, which pulls your question somewhat into an on-topic area.

But you're correct in saying that it's a bit confusing. As Reid pointed out, there was some back-and-forth discussion about the ad, but somehow we stuck with it.

Looking at it, I think you've chosen the optimal path: in case of doubt, ask on Crypto.META.

Since I was the one who created that advertisement (yep, you can put all the blame on me), and since some people (including myself) might argue that Crypto.META is the best place to handle questions related to a Crypto.SE advertisements, I will simply provide the solution here for your convenience (and for reference purposes).

Let's walk through this together…

What we know is that there are 3 lines of ciphertext:

While staring at the ciphertext, another thing you might notice is that the three lines seem to be somehow related. Line 1 starts with a D, line 2 with an E, and line 3 with an F. This hints that the first letters increase with +1 each line, as if the line number is somehow related. That might influence all letters on the individual line… something to keep in mind.

Let's take the hints we've got and play a bit with those letters by guessing that the first line contains letters what are +1 of the original plaintext letters. After all, each following line seems to be +1 too… at least, when looking at the first letters of each line. So why shouldn't there be a line 0 which contains the plaintext which was then calculated +1? Let's stop wondering and simply see if we're correct:

If you go through the rest of the letters yourself, you'll quickly be able to discover the plaintext.

Work your way through the rest of the letters. Knowing what plaintext line 1 returned, you'll quickly discover it produces the same plaintext we already retrieved in line 1.

Again, work your way through the rest of the letters. Already having successfully decrypted line 1 and line 2, decrypting line 3 should be easy (and almost boring).

In case you want to verify if you've correctly decrypted it: the plaintext represents a (repeated) answer to the question “Where can I learn about Cryptography?”

I based the whole thing on a real crypto-classic: the Caesar cipher (ROT13). But instead of using the regular ROT13, the ciphertext in the advertisement was gained from rotations which relate to the individual line numbers… meaning: line 1 is ROT1, line 2 is ROT2, and line 3 is ROT3.