For example see my question: 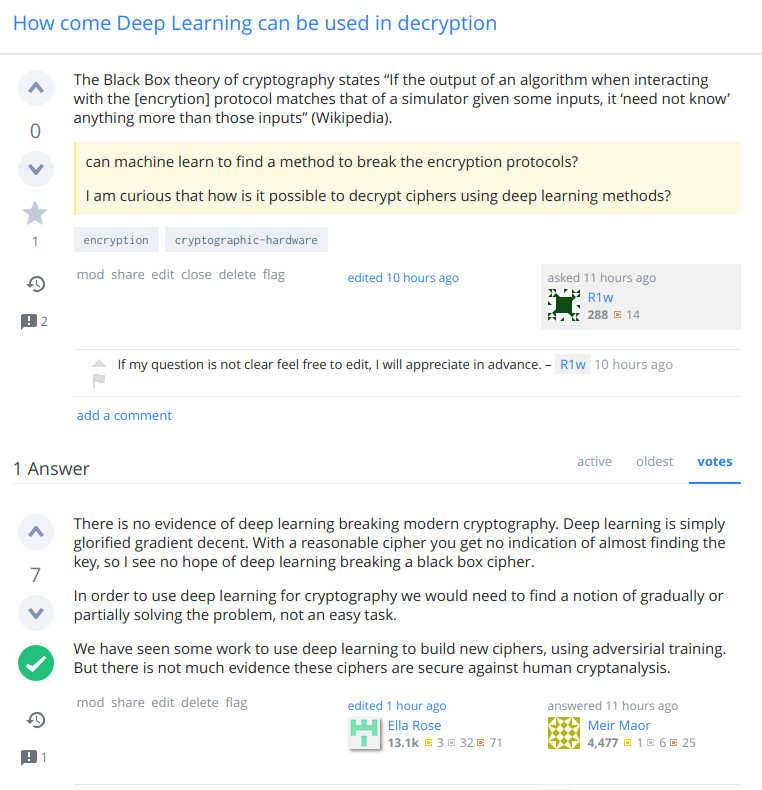 First, let's see what the help text to the button says:

I suppose most people thought that a bit of research would have shown that the answer is "obviously" no to the question.

Additionally there may be a "herd effect" going on where people see that the question has no upvotes and thus think twice before upvoting whereas they are more easily "tempted" to upvote if somebody else upvoted beforehand, maybe because they implicitely assume that that other individual has already done the "hard work" of deciding that the question is "good".

Now let's look at the text for the answer upvote button:

Additionally to the above-mentioned "herd-effect" applying again here, the criterion is weaker. Is the answer useful? Yes because

Additionally (a minor point though), the answer "bashes" the current trend-technology that is "machine-learning / AI", that in some groups has a similar status to blockchain as "overhyped technology" by calling it "glorified gradient descent" giving it sympathy points for members of these groups.

I'll focus on the structure and syntax of the question rather than the generic answer that focused more on the semantics by SEJPM.

The way that the question was asked doesn't help. If I look at the screenshot:

This is not a question, it's given as a statement, as a fact. Most answers will focus on it being incorrect. So the question start off with a statement that is considered false. Not a good start. As for the formatting: it cannot be read as a question and "Deep Learning" is capitalized for some reason, as if it has godlike features.

Then comes an quote from Wikipedia. That's not such a good start of the question as it seems to be pulled out of context. Without the surrounding info it is very hard to understand what is meant. You should start with a short intro on what you're trying to do. People will feel strained to read all text, and a lot of possible upvoters will already give up at this point. The fact that this part of the question doesn't use the Markdown quotation feature and doesn't link to the source doesn't help at all. That said, it is good that it is at least contributed to Wikipedia.

Now you finally get to the questions, for which you use quotation. This makes it standout from the rest of the text, but it confuses the reader. Worse, it will infer a message of self-importance to the reader. We are not supposed to quote ourselves; this is considered arrogant by most. Combine that with the over-confident title people will start to feel strongly negative about the post by now. The fact that you didn't take the time to proof-read and capitalize the sentence correctly doesn't help.

The last sentence is a repetition of the statement in the title. That's good - we don't want confusion there - but again, it states something as a fact while it isn't.

Before we get into extended discussions, I'm not implying that this is what you intended. This is what I am getting as the message. Others may do as well, and this is possibly why the question doesn't get (m)any upvotes.

I often do edit questions, and simply reformatting the question can do wonders for the number of upvotes on the site. Sure, the content of the question is what is and should be most important, but you'd be amazed how much readers are influenced by the way how a question is asked - this is more than true for the real world as well.

I'm not at all taking [uh, lost word: the glory] for the reputation gained by this question but please see my edit. The question started off at -1, and then quickly gained 15 upvotes. Yes, "herding" could influence this and the question contents was OK.

But just how a question looks may strongly affect the number of upvotes. Having a well formatted / easy to understand question matters a lot.

One of the things to learn about SE is that upvotes or reputation aren't that important. Be glad that you get answers or at least new insights.

If the question can be found on Google, all the better, that's how most people will find it to use for their own advantage. Instead of trying to get more answers, edit the heck out of your question and especially the question title / tags so it ranks high.

This was what I did when I couldn't find my own question that I required for a later task / question. Simply adding a few keywords and rewording the title was enough for it to rank much higher. It still has few upvotes, but the amount of visits of that page is amazing.

If you want to focus on upvotes / reputation (the gaming system behind StackExchange) then just browse & answer the latest C# or Java questions on StackOverflow instead - crypto is not the right topic for that :P

The Overflow Blog
Featured on Meta

26
Why don't we upvote questions on crypto?